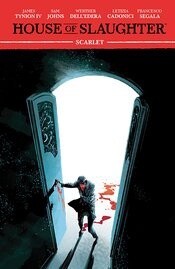 9781684158546
$14.99
In stock
1
Product Details
Brand: BOOM! Studios
(W) James TynionIV, Sam Johns (A) Letizia Cadonici, Werther Dell'Edera (CA) Rafael Albuquerque
What secrets do the mysterious scribes of the Order of St. George, the Scarlet Masks, record within the shadows of the House of Slaughter?
Enamored with stories of ancient hunters, as well as those in his midst, Edwin Slaughter only gets to write the stories... never live them. That is, until a legendary monster that's taken the lives of countless children brings Edwin into the field.
Will he live to survive long enough to document his experience, or perish with his story left untold?
Delve deeper still into the world of Something is Killing the Children in the second volume of the bestselling series written by co-creator and award-winning author James Tynion IV (The Department Of Truth, The Nice House On The Lake) and co-writer Sam Johns (Punchline) alongside rising star artist Latizia Cadonici and co-creator Werther Dell'Edera (Razorblades).
Collects House of Slaughter #6-10.
Save this product for later
Display prices in: USD